A Mazel Tov Cocktail Party is a "good vibes explosion" created in response to the current climate of incredible polarization and negativity that pervades our daily lives.

Spearheaded by world music superstar David Krakauer and producer Kathleen Tagg, "Mazel Tov Cocktail Party" showcases an international crew of high-octane musicians. Clarinet wizard Krakauer is the Godfather to Tagg’s quirky keys & production, Iranian dynamo Martin Shamoonpour’s hand drumming, jazz guru Jerome Harris’ driving bass, rapper Sarah MK’s trenchant rhymes and oud- & guitar-meister Yoshie Fruchter’s sinuous lines. Together they bring their enormous musical and cultural diversity to the project and collaborate to create powerful original material that celebrates old forms by expanding the conversation to include new discussions and issues facing our world today. Their influences are global, but the sound they create collectively has produced something uniquely their own.  In addition, Jeremy Flower and Selwa Abd (aka Bergsonist) produced beats to round out the sound for layering with the live performance.

Familiar dance forms such as Polka or Square Dance never sounded this way before, with hand drumming, propulsive electronic beats, lyrics calling for catharsis and positivity, deep grooves and Krakauer’s wailing clarinet crying out for us to join together, celebrate and feel the power in our aliveness.

HOW IT CAME TOGETHER in 2020
Trying to put together a new recording and (eventual) touring project is an incredible challenge when you never have the chance to be in a room together to bounce around ideas and create a collective synergy. But this is exactly what we did with this new project. This past summer David wrote some new music and sent it around to the band in the form of a lead-sheet, a recorded clarinet melody and a click track. Then each person added their individual contributions by recording and filming themselves in front of a green screen. Kathleen then put all the rough tracks together musically editing and arranging them into a cohesive whole with Jeremy Flower and Bergsonist's beats.  Then all the musical and visual material was given to the amazing theater director/filmmaker Michael McQuilken. He created a series of mini art films that “brought the band together” into one virtual space.
We have more colleagues on the way with new tracks or our upcoming album. So we’re looking forward to the next steps and to being back on the road and bringing A Mazel Tov Cocktail Party to you! 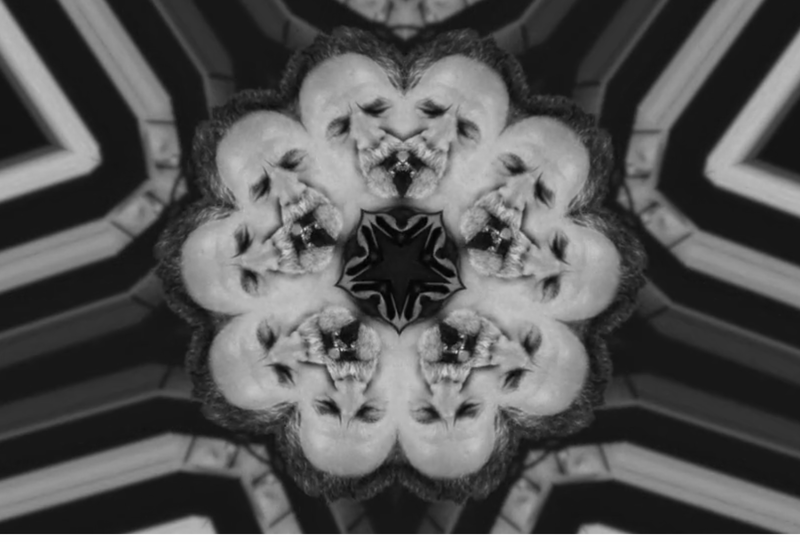 BREATH & HAMMER: THE TIES THAT BIND US

Breath & Hammer: The Ties That Bind Us is an immersive concert experience that envelops the audience in an array of sound and images. Originally designed for the Pierre Boulez Saal’s multi-level, in-the-round hall, Breath & Hammer: The Ties That Bind Us is a new incarnation of the Breath & Hammer Electric program transformed into a live videography, spatialized surround-sound multisensory concert experience.
The Breath & Hammer project is a passionate, eclectic and highly personal musical journey representing the confluence of many streams: the strong foundations of both performers as classical concert musicians, Krakauer’s years as a klezmer innovator, composer, band leader and avant-garde experimentalist, and Tagg’s multi-faceted career creating and performing for the stage and theater, as well as her skills as an arranger and producer. Krakauer & Tagg share a constant quest to redefine the sounds and roles of their instruments and push far outside the boundaries of the traditional clarinet and piano recital by including extended techniques, loops and samples (all generated from either the piano or the clarinet). In the words of Krakauer & Tagg: “Fundamentally, Breath & Hammer is about connections between people and a celebration of identity through music. The program is a mix of our own compositions along with our arrangements of song-form pieces gifted to us by our brilliant friends and collaborators from totally different backgrounds, genres and musical points of view.”

For this fully immersive show,  Breath & Hammer: The Ties That Bind Us, Tagg created a brand new set of “tape piece” interludes that act as bridges between the different pieces on the program. These interludes travel throughout the space within the hall through a surround-sound speaker configuration, creating a sonic representation of musical offerings from one piece to the next as well as a nod to the ties that connect us to one another no matter how far apart we may seem. Some interludes begin with elements from the preceding piece that may be unrecognizable in their new context, and that then invite elements of the next piece to join them and lead into the next piece.
​
Through the use of live cameras and videographer Jesse Gilbert’s original audio-reactive visual instrument, SpectralGL, the audience is invited to form a more immediate and intimate relationship with the performers and their creative process as it unfolds. The original video design, projected onto a translucent hexagon of scrims surrounding the performers, was custom-made for the in-the-round performance space of Berlin’s Pierre Boulez Saal. However, Breath & Hammer Immersive is able to adapt to the unique needs of each performance space and is equally at home in a proscenium or in-the-round hall.
READ MORE 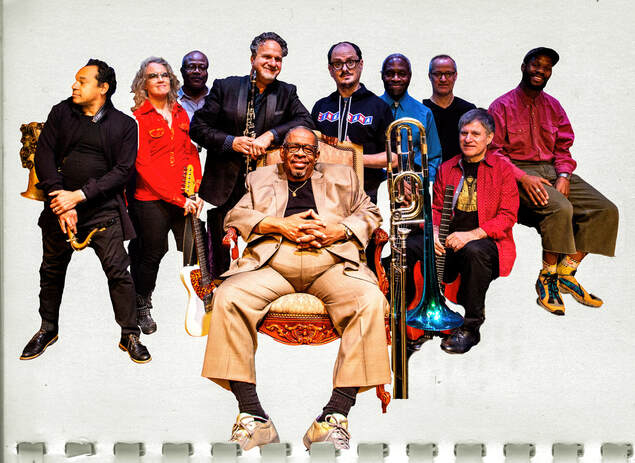 An unprecedented collaboration between three cultural visionaries: DAVID KRAKAUER, champion of klezmer music and world-class clarinetist; legendary funk trombonist and arranger FRED WESLEY, celebrated for his work with James Brown and George Clinton; and hip-hop renegade and beat architect SOCALLED – Abraham Inc. heralds a time when boundaries are eroding, mutual respect is presumed, and musical traditions can hit with full force without concession or appropriation. Backed by a three-piece horn section led by Wesley, plus musicians who collaborate frequently with Krakauer and Socalled – and the result is an all-out klezmer-funk dance party!

Says Krakauer, “Ever since I formed Klezmer Madness! in the mid 1990's I've been exploring the possibilities of adding funk, jazz, and lately hip-hop influences to klezmer… These explorations logically led me to my collaboration with Socalled, a kindred spirit in the search for that magic place where these styles can find a commonality of ecstatic trance.

“In late 2005, Socalled and I were on tour somewhere in Europe when Klezmer Madness! drummer Michael Sarin mentioned to Socalled that a friend of his was playing with Fred Wesley. A lightbulb went off in our heads… I got in touch with Fred and we met up in New York - at the Carnegie Deli, where we had matzoh ball soup - and decided to try playing together… We booked a rehearsal studio, not quite sure what was going to happen. Fred and I improvised together on a beat by Socalled, and at the end of it we all said to each other, ‘Wow, this totally works!'”

Says Wesley, “I think we came up with a killer product. It is a pleasure doing something different with such dynamic musicians as Josh and David. Our talents were stretched to areas that we couldn't have imagined reaching alone. We all inspired one another.”
​
As Socalled sees it, Abraham Inc. is about “bringing people together with music, celebrating differences and commonalities… Cultural hybrid vigour in yo’face.”
READ MORE

KEEPERS OF THE FLAME

In 2017, Krakauer & Tagg created a new large-scale work at the Borderlands Foundation in Sejny, Poland. The Keepers of the Flame is intended as an artistic response with the Invisible Bridge Orchestra to the challenges of the modern world, and demands a culture of solidarity in response to the threat of deepening social and cultural divisions.   For the original performance in Poland, a magical experience came from an encounter between the artistic explorations of  David Krakauer and Kathleen Tagg, and all the other musicians as a collective rumination on the fate of exile and wander.
The piece was designed to be transferred to multiple different settings, contexts, and communities, while dealing with the expansive ideas of bridge-building, listening, offering, and inclusion from each musician and the fact that each of us has a multiplicity of different contexts and roles, depending on our situations. The original creation was designed for the multi-generational Sejny klezmer band, a community initiative of the Borderlands Foundation, which sought to honor the space in which the Borderlands’ Cultural Dialogue Center is housed: a former Jewish synagogue, home to the Jews of Sejny, formerly 24% of the population, and now a town with zero Jewish residents. During an intensive collaborative workshop period at Krasnagruda that incorporated contributions from the klezmer orchestra under the direction of Wojciech Szroeder and special guests: Shadi Al Maghrabi (oud, Syria-Germany), Jehad Jazbeh (violin, Syria-Germany), Youssef Nassif (kanun, Syria-Germany), Mykhaylo "Manu" Balogh (saxophone, Ukraine-Poland), their arts dialogue in a borderland area (Poland, Lithuania, Belarus) with Catholics, Protestants, Russian Old Believers and others, created a living tribute to the Jewish music, once silenced, by creating a band that performs klezmer music as a living form.

Ideas from the original The Keepers of the Flame project can be merged with the new cultural perspectives of musicians living and working in a specific location, and will yield a completely new piece depending on the locale and performers.  As the piece requires input, musical offerings, and sharing from all musicians present, an intensive workshop period is required before the performance.  The ideal performance of this work would also create a specialized performance designed for the room, and with heightened theatrical lighting.